Romania’s economy is one of the fastest growing in the European Union, providing a platform for a flourishing business environment. Industry, energy and IT are among the sectors set to focus new investment and create high-quality employment.

While many European Union countries are beset by low growth rates or the onset of recession, Romania continues to expand with confidence. On top of posting above-average regional growth, the country’s leaders sense that now is the moment to invest in industrial and technological development, boosting Romania’s entrepreneurial fabric and the creation of skilled jobs.

In essence, a new Romania is being born as the country reindustrializes and boosts its energy infrastructure on the way to becoming a major gas exporter. The country’s automotive sector is booming, with turnover growing by 20% in 2018 to €28 billion, according to the ACAROM producers’ association. The government is also looking to develop Romania’s significant and largely untapped potential in minerals, as well as consolidating an agriculture sector that is already one of Europe’s biggest exporters. 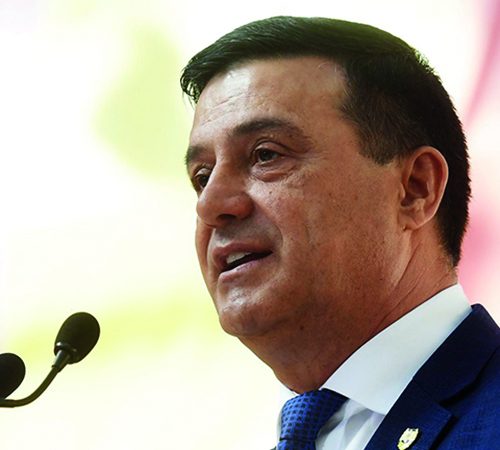 Hybrid cars require graphite and cobalt for the batteries. We haven’t exploited those resources in Romania yet

Romania’s leaders, such as the former Minister of Business Environment, Trade and Entrepreneurship Stefan Radu Oprea, want to add a richer layer of entrepreneurial endeavor onto these solid productive foundations. High-tech sectors such as IT and defense hardware are growing areas of interest. Oprea mentions Bitdefender, the global cybersecurity and antivirus software company, as a prime example of the country’s success in IT – “and people don’t even know it’s a Romanian company.”

Oprea cites more examples, such as UiPath, which specializes in robotic process automation, and is aiming to capitalize around €10 billion. “We have over 100,000 employees in the IT sector, and we have stabilized them through 0% taxation on wages in the IT sector.”

In defense, Former Economy Minister Niculae Badalau explains how partnership with international companies is lighting the way to a more advanced industrial future, noting Romania-based production of Piranha armored vehicles for General Dynamics and the manufacturing of troop carriers in collaboration with Germany’s Rheinmetall.

Badalau also mentions Romania’s mineral potential, including large reserves of gold, copper and other elements. “Hybrid cars require mineral resources like graphite and cobalt for the batteries. We haven’t exploited those resources in Romania yet.”

Untapped business potential is also a focus for Romanian governments, which have introduced reforms to improve the environment for startups and investors, including a law to streamline the process for public-private partnerships (PPPs), fiscal incentives and progress in the fight against corruption. The Start-Up Nation program was introduced to foster entrepreneurial spirit, with 10,000 newly established companies selected each year for grants of €44,000.

“What we are doing for SMEs as well as for exporters is part of a whole ecosystem we want to implement to become one of the most business-friendly environments in the region,” Oprea says.

A key part of Romania’s continued growth is the relationship with its biggest trading partner: Germany. In 2018, the bilateral trade in goods and services totaled nearly €32.5 billion, which constitutes one-fifth of Romania’s international commerce. For President Klaus Iohannis, the importance of the relationship with Germany lies less in the quantity as in the quality involved. “It’s important that commercial exchanges between Romania and Germany mostly consist of goods with high added value.”

Related Articles
Economy
This site uses cookies for analytics, personalized content and ads. By continuing to browse this site, you agree to this use.OKREAD MORE